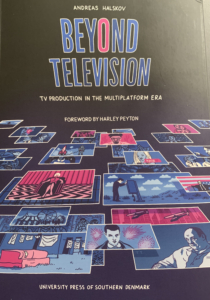 We still talk of film and television as two completely separate media. However, especially when it comes to fiction, films and television series, we might be better of if we started talking about different forms and genres within the greater category of the audiovisual arts. Cinematic institutions have a longer history than television, and they have for a long time been connected to the cinema. Television started in the home, and was for a long time in different forms connected to a linear schedule. Public service in Europe and commercial tv in USA. The two media had something in common. To go to the movies meant picking what was available in a cinema near you, at a specific time. To watch television, you depended on what a particular channel offered on a particular day and time. In the multiplaform era after 2000, much of this has changed, and film and television are now available side by side on both the traditional platforms and a lot of new ones. The possibilities of the viewer to choose has increased – but so has the power of global multinationals.

Challenging our traditional understanding of television

This global and technological change of our television landscape is in focus in Andreas Halskov’s insighful and very interesting new book Beyond Television. TV Production in the Multiplatform Era (2021). It is a rich analysis of changes in both the institutional development, the television production culture, and perhaps most strongly in traditional genres, storytelling and style. In his own words, the central argument in the book is:

It is a central argument in the book that modern TV series often challenge traditional understandings of television, moving beyond traditional stylistic choices, traditional modes of storytelling and conventional genres and formats, yet they still have a serialized structure and, in different ways, adhere to televisual conventions (…) The study focuses on productional, narrative and aesthetic aspects, and although it gives preliminary account of the modern TV landscape (…) it is not a technical study of interfaces, distribution and media infrastructures (Halskov 2021: 14).

Halskov also takes us on a historical tour through some of the major changes in especially American television. This is great, because often we find that books dealing with the present and with dramatic shifts tend to forget, that media history is in fact often based on a series previous historical changes. As Halskov rightly points out, we find at least three interesting golden ages or golden shifts in American television history: the era of television theatre in the 1940s and 1950s; the era of quality television series in the 1980s and early 1990s; and finally the cable revolution from the late 1990s. HBO is a frontrunner in this development, leading to today’s streaming culture. The slogan “It’s not television, it’s HBO, signals a liberation from commercials, the posssibility of targeting a paying, quality minded audience.

Halskov does not directly deal with film or European television, but he points to a certain creative merging between those working in film and television as film directors like Michael Mann and David Lynch started working in television. We see the same tendency in the international Danish breakthrough on television, when Lars von Trier made The Kingdom (1994) and a much deeper creative  merger between film and television took place, when the international Danish wave started after 2000. Rainer Werner Fassbinder in Germany and Krzysztof Kieslowski in Poland are examples of the same development. In the UK, a writer like Dennis Potter already in the 1970s decided that TV was the most appropriate medium for adressing modern mass audiences. He certainly did that in a challenging way in for instance The Singing Detective (1986, see Bondebjerg 2018).

Halskov’s analysis of the transformation of American television series is a story of how a formulaic, commercial TV culture started to reform itself and develop into a much more complex and innovative art form. Somewhere during this development tv started to become almost the leeading creative platform for audiovisual art. In the late 1990s we see a much stronger interaction between film and television, and between mainstream narratives and complex, innovative narratives. Television has moved from a very low status in the cultural hierarchy. Cinema has gone through a similar historical development. The two media are now entering this new multiplatform era on a more equal level.

The art of making television series

Even though Halskov’s book has a lot of really interesting data and insights into the industry and technology of the new form of television, the most valuable in his book is going deep into the industry as a creative field. This includes really useful interviews with a lot of central players behind the American television revolution: David Chase (The Sopranos), David Simon (The Wire), Mark Frost (Twin Peaks), Nic Pizzolatto (True Detective), just to mention a few. 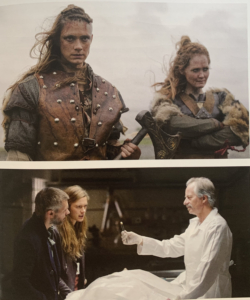 The book also has a most interesting focus on local/global and transnational/glocal, dealing with the fact that globalisation doesn’t simply equal homoneginisation.  This section includes an interview with the two Norwegians Bjørnstad and Skodvin, who made the first Norwegian series with HBO, Beforeigners (following the success of Lilyhammar). This link between global and local is also the theme of the interview with Kelly Luegenbiehl, the vice-president of Netflix’s local language originals.

Halskov is a brilliant television analyst himself, and the book has some really outstanding analyses of some of the key series behind the television revolution. But it adds to the book’s quality that Halskovs own analyses integrate observations and creative statements from central TV writers and directors. The concept of transnational television in the book is thus a rather fine tuned complex concept:

What globalization doesn’t necessarily means is a return to a new way of finding the lowest common denominator. Halskov shows us the result af remakes, but also the fact that original series actually travel, and that transnational audiences can develop into viewers that accept things that differ from their own national content formats. The Bridge and Skam are examples of both remakes and original transnational distribution. Taking up the effects of transnational reception, Halskov’s book also underlines the findings behind ‘mediated cultural encounters’ brought forward by the MeCETES project Transnational European Television Drama (Bondebjerg et. al. 2017), or in studies of how Danish and other national TV series actually make an impact in global television, for instance Danish Television Drama. Global Lessons from a Small Nation (Waade, Redvall  & Jensen, eds. 2020)

Maybe there is an air of hopeful optimism in the book – but it is also based on facts and actual tendencvies. Halskov argues not just for the creative complexity of global and local, but also for the broader breakthrough of what he calls complex and even polycentric storytelling. Taking Thrisha Dunleavy’s book Complex Serial Drama and Multiplatform Television (2018) as a starting point, he expands it further into an eight point definition of narrative complexity:

In many ways this description of modern television narratives describes forms that have long been known in film and litterature. However, the specific dimension of TV narratives is the ability to develop very long and very complex stories. Not just through season episodes but over many seasons. Still, many of the usual avantgarde techniques seem to have been established more broadly in series that are more broadly accepted by new audiences. At least, this was the main points in HBO’s  reach for global audiences. Public service in Europe, we could argue, has always been about the meeting between the advanced and complex and the mainstream, and we have historically seen this as an alternative to commercial, American dominance. Is this main narrative still quite valid? HBO, Neflix and other streaming services seem more difficult to place in such a dichotomy: here mainstream and innovative forms of audiovisual art seem to meet and influence each other.

Global and national aspects of the audiovisual arts

As already noted, Halskov’s book is mostly about the development of post-2000 American television. However there are many references to national and European  tendencies and cases within the new structure of multiplatform TV. This has to do with the fact that we see similar tendencies in Europe and that the global streaming services are also clearly interested in taking in local productions and thus establish a firm link between a global reach and a regional, national grounding. The global here is to a very large degree still US dominated in film and TV series, but transnational, creative collaboration is also an important tendency. Suddenly it seams that the big global players have shifted strategy towards and integration of local-national products.

It was in the beginning of the rise of globalisation and digitalisation quite common to find books annd articles talking about ‘disruption’, a fundamental change of film and television. Halskov is not taking that position. Even though he talks about fundamental changes, he also stresses the continuity. Film is still film, TV is still TV, although we find all genres and media mixed on the global streaming services. The new forms of globalisation and rise of platforms for audiovisual arts have on the other hand facilitated creative transnational and transmedia collaboration. As Halskov points out in his epilogue, there is planty of talk about the cinematization of telvision, the merging of creative talents and format.

However, looking at both the American and European landscape, it is far too early to declare the death of film and television culture as we know it. One of the lessons from media history studies is that changes rarely kill of old media. It is more likely that the old media will adapt to new situations and technological possibilities. HBO is still a cable TV station in the USA and atv the same time a global streaming service and producer on the rise. In Europe the old public service stations are working hard to find a new place in a changing media world. They are in no way dead or dying. BBC and DR for instance, are both central players in the production and distribution of  film and TV-series, and they are developing into central national streaming services. The national is not dying in our media cultures because of globalisation, they are probably more important that ever in the mixing of global and local.

Andreas Halskov has written a very timely and important book. He gives us a facsinating and deep look into the American-global creative media industries, and by doing that he contributes to the ungoing political media debate. His optimism and passion for the new forms of TV narratives is paired with realism and works against more gloomy perspectives on globalisation. His book brings us into a fascinating new world of TV narratives, and into the creative minds of many of the people that have created a new more diverse and complex way of telling stories on TV. It is a book about American TV, but it is of great importance for the understanding of also national TV cultures in Europe.

Want to join the discussion?
Feel free to contribute!